We have reached the time in late summer when — following many trial runs, crashes and ugly landings — chicks have begun to fly. But chicks do not always take wing, circle and land in their own lake. They wander. The picture below was taken on September 17th by Bonnie Montgomery of Fifth Lake, east of Rhinelander. She caught the legs on a departing loon well enough that we could identify it (see two bands on right leg pointed out by green arrow) as one of the two chicks raised on Buck Lake, south of town. 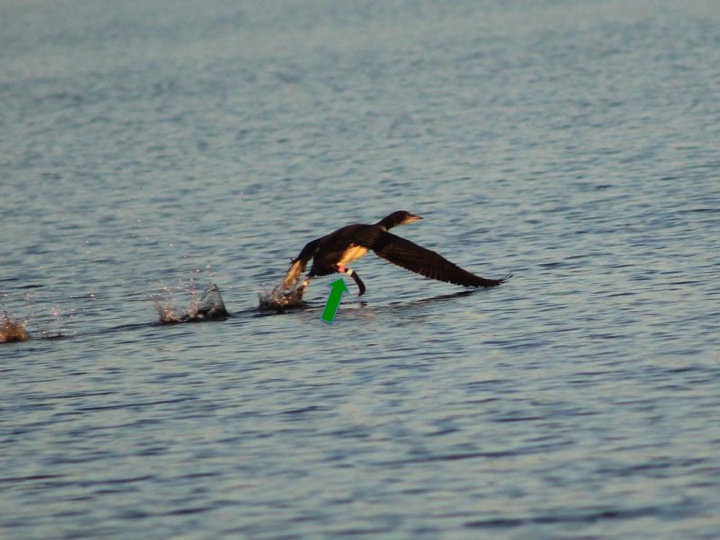 We have a keen interest in the local wandering of chicks like this one. Following our finding that loons settle on breeding lakes that are similar to their natal lakes, we are interested to see how this preference takes shape. Perhaps loons spend their entire lives preferring to live and forage in lakes of a certain size and water chemistry. If so, this lifelong predilection should make itself known early. That is, juveniles that begin to fly and visit lakes near to their natal lake should prefer lakes similar to the one on which they were reared.

Kristin and Gabby this year, Nathan last year, and Joel in 2011 have examined the hypothesis that natal site matching (as we call the preference of a loon to breed on a natal-like lake) is evident even in the local wandering of chicks. It will take a good deal of data to examine this hypothesis, but we are hoping that our crew will collect enough data (especially after this year’s bumper crop of chicks) to make statistical analysis possible.

Speaking of Kristin, Gabby and Joel, they caught another chick tonight that had become hooked in the neck by a lure and snarled in two types of fishing line. Luckily, the hook did not penetrate deeply. The lure was removed by Mark Naniot of Wild Instincts, the line was cut off of the bird, and the juvenile was released, still apparently in good health. 2013 has been a very bad year for loons and fishing!