It’s like deja vu all over again at Muskellunge Lake this week. Thanks to Linda Grenzer’s vigilance, we have learned that the productive and photogenic pair on Muskellunge came back together this week — just as they did about this time in 2014! As Linda’s photo shows, “Clune” and “Honey” (Linda’s names for the banded pair) were a bit wary of each other at first. This shyness should not be surprising, as they have both lost their breeding plumage and donned winter attire. According to Linda, though, they rather quickly recognized each other and paddled off contentedly together. Apparently after 6 years of being together, and rearing of 10 chicks to fledging, familiarity with your partner involves more than just feathers!

We have very poor information on the behavior of territorial loons in the fall, so we can only speculate about what it means that an established pair seems to come together routinely just before fall migration. As a behavioral ecologist, I am inclined to interpret such meetings as more calculating than romantic. I cannot resist the temptation to view such a meeting as a final patrol of this precious breeding lake by its owners to ensure that no intruders have tried to put down roots in hopes of claiming Muskellunge in 2017. To any such pretenders, the presence of a tight pair late in the fall would signal that the territory was not available without a costly battle. But that is just speculation.

I must apologize for taking so long for this post; I have been busy exploring loon survival patterns. Indeed, I have been able to sharpen our view of senescence considerably. Some of you will remember that I announced several months ago that males senesce, while females do not. While I was excited about the apparent finding, it seemed to defy logic and begged for elaboration. With the return rate data from 2016 in hand, I was able to reanalyze survival patterns of both males and females banded as adults on territory. As is becoming all too common, I must eat crow. It is still clear that males senesce — those between 5

and 19 years of age survive at a rate of 94% annually, while those 20 years and older survive at an estimated rate of only 71% (see graph, above). That is a steep drop-off in survival rate, indicating clear senescence. But the newer, more robust dataset has shown that females are not immune to the march of time. Indeed, 5 to 19 year old females survive at about 94%, like males; 20+ year old females fall off to 79% survival (see above graph). It is a tad deflating to realize that the world was more complicated than I had reported before, but also a relief to know that — and don’t take this wrong — females are not immortal!

One more tidbit relating to senescence. I have been able recently to complete a survival analysis of loons that were banded as chicks in the study area or nearby. (We call these birds “ABJs”, or “adults banded as juveniles”.) The most striking outcome of the ABJ survival analysis is, again, a difference between females and males. In this case, male survival plummets from 94% at ages 4 to 14 to 78% at ages 15 to 18 among both territory holders and floaters (adults without a 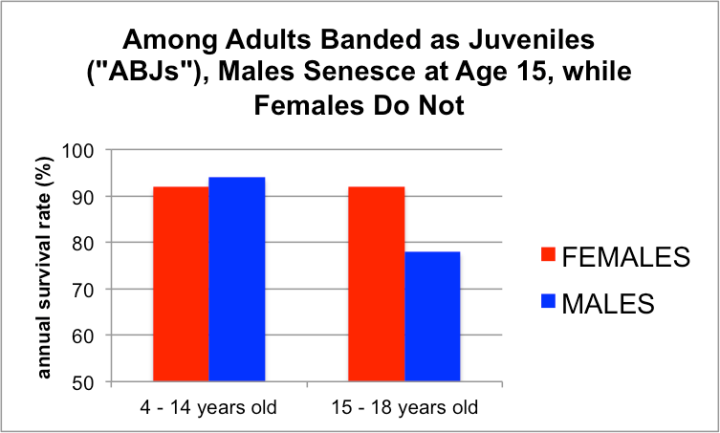 territory; see graph above). In contrast, females show steady survival of about 92%, regardless of age or territorial status (see above graph). Males, in addition, suddenly begin to lose their territories to eviction at the rate of 38% when they turn 15 years old, while females only suffer eviction at a rate of 12% from 4 to 18 years of age. So here we have evidence that males not only die at a higher rate once they turn 15, but that they also become vulnerable to being booted off of their territory.

If you have paid attention closely through the litany of data I have dumped on you, you have probably noticed one final pattern: the ABJ analysis showed senescence occurring in a younger age class than did the analysis of territory holders! That is, male ABJs senesce at age 15, while male and female territory holders show no senescence until age 20. This is a brand new finding that I am still puzzling over, but there is an obvious explanation. Territory holders are likely to comprise a fitter class of adult loons that have shown their ability to fight for and defend territories and also rear chicks. In contrast, ABJs are only chicks that have survived to adulthood and returned to the study area. They are not “battle-tested” by having claimed a territory and bred there. Much later senescence among the evolutionarily fittest set of loons in the study area should not surprise us.

I am not ready to stake my reputation on this latest finding, but if it holds up, it dovetails nicely with one of the long-standing debates among ecologists concerning territorial breeders and floaters. We have long wondered whether territory holders should be regarded as floaters who got lucky and found a territory, or whether the two groups are, in fact, distinct classes in terms of fitness. The steep drop off in survival of male floaters in loons, compared to male territory holders, would strongly support the latter interpretation.